This is an archived version of the page maintained for historical reference. Go to http://wehealth.org

Covid Watch is an organization with a clear mission – developing open source code to empower people with technology to stop the pandemic while protecting digital privacy.

We build and foster decentralized technology using anonymous exposure notifications that help slow the spread of COVID-19 without sharing any personal information. 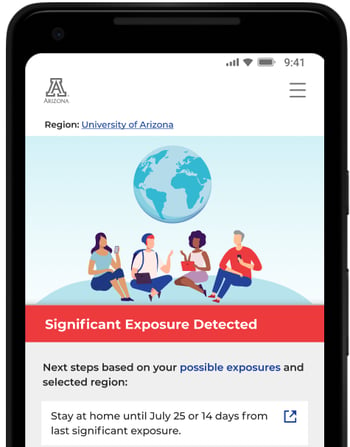 We enable communities to leverage the power of crowdsourced data. We empower individuals to take action and choose to influence health outcomes for themselves, their families, friends and communities.

We protect privacy and believe individuals should have personal power and choice to control their own digital data, with freedom from surveillance. Our digital health tools are designed with privacy in mind.

We use evidence-based, ethical technology and scientific research to determine the most effective ways to benefit others. We drive individual and collective action for a healthy future for all.

Our solutions are built on open source code that is available for all to see. Everyone is free to participate and contribute to our efforts, and we welcome multiple voices, different perspectives and diverse experiences.

In the first weeks of 2020, as the coronavirus began to rapidly spread around the world, we soon realized that many of the technologies deployed to fight the pandemic were also posing a threat – to our privacy. The Covid Watch founders became concerned about the emerging, mass surveillance-enabling digital contract tracing technology, and in February 2020, started the project to help preserve civil liberties during the pandemic. We never veered from that original mission, and by March we became the first team in the world to develop a privacy-preserving mobile app using Bluetooth proximity networks. 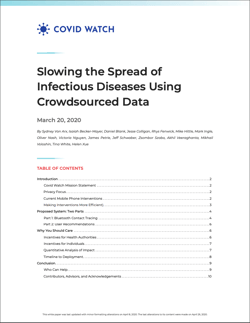 On March 20, 2020, we published Slowing the Spread of Infectious Diseases Using Crowdsourced Data, a white paper describing how to structure a Bluetooth contact tracing system in a decentralized and anonymous way using randomly generated and locally stored Contact Event Numbers (CEN). Our CEN protocol became the basis for the Temporary Contact Number (TCN) protocol. With this protocol, our team co-founded the international TCN Coalition of app development projects committed to building anonymous systems. This achievement was followed by the rapid development of very similar anonymous protocols worldwide in early April, like the Swiss EPFL’s DP3T, MIT’s PACT, and Google/Apple exposure notification (GAEN) APIs.

Covid Watch is the first fully anonymous Bluetooth exposure notification app in the United States to be built on the GAEN API. In May, we became the first in the country to test the protocol through a pilot program at the University of Arizona – with the potential for statewide deployment and beyond.

The team members who developed Covid Watch were foundational to the development of exposure notification technology – we’re experts on it – and by having helped invent this approach, we are best positioned to move the privacy-preserving technology forward for a global solution.

Our initial mission to create and use technology for the greater good still rings true, continuing to unite and inspire volunteers and creating space for the advancement of citizen-led technology. Started as an independent research collaboration between Stanford University and the University of Waterloo, the Covid Watch team is now an ever-growing collaboration of over 650 volunteers from around the world, including expert advisers in public health, epidemiology, privacy, policy, and law – all with a shared vision of ending the pandemic through voluntary public action.

Find out how you can help.
Volunteer